When Spinoza, a 16th-century Dutch philosopher, exposed his alternative views on God, he was up against the only path available to him, the church, and its authority. He opposed the church’s unerring interpretation of canon. Religion wasn’t an option like being non-binary is today, everybody believed in God whether they knew it or not. If they had a problem with God, they fought him through the church. Think Galileo and his history with the church and the problem of evidence. (Responding to mounting controversy over theology, astronomy and philosophy, the Roman Inquisition tried Galileo in 1633, found him "vehemently suspect of heresy", and sentenced him to house arrest where he remained until his death in 1642). Spinoza wasn’t against God; he was against the church. And free thinkers were martyrs. He was excommunicated, a word that should burn our collective souls to a stake, it should echo all the wrath and fury that the human mind in 16th century Holland could handle imagine and experience without going completely insane.

The official ceremony of the church quitting you, the ex-communication was the ringing of a bell, the snuffing of a candle, and the closing of the Bible. Then everyone in town was instructed to neither speak to him, sell to him, nor even make eye contact lest they be excommunicated themselves. His works were not to be read. He was to be treated like a dog. It was the social poison of maintaining one’s belief, (a cost the 21st century pays dividends in racism, sexism, and hyphenated phobias). Spinoza was completely ostracized, hated, and ignored. He wasn't an apostate, he was a free-thinker. This was the power the church once held. Or the modern-day Mormon Church.

Spinoza wasn’t up against God, for he wrote several treatises in both his and God’s defense. Spinoza 101: God is everything and everything is God. It's simple but he developed it into a philosophical scientific inquiry. Our conflicts of belief today, mounted in the superstructures of such a complicated age look bereft of Spinoza’s personal legacy of social torture. The prices paid for us to have the privilege to believe or not believe are an expense for those of us that live with religious freedoms. We are beneficiaries of those who rebelled and were disconnected from a vengeful and angry church, deputized by God.

When science as an enterprise first began in the 16th century, it was done so by the grace of God. Even Darwin felt guilty and apologetic for his effectiveness in his discovery of evolution. He took no vanity or glory in his findings. The scientific mind wasn’t looking for evidence against God, it was to describe nature.

If God wanted it otherwise, God would intervene. God would send lightning bolts down from heaven and irradicate the inquiry. But He did not, and science grew from rational thought and genuine intrigue into a self-sustaining method of pure reason. Science would be knocking on heaven’s door with a warrant.

One hundred years ago, at the frenetic height of our militant quest, science had God narrowed down to the fundamentals of particle physics and the mental Everest of relativity. As he wiped three hundred years of Newtonian thinking off the plate, Einstein said if there was a God, he believed in Spinoza’s interpretation. How peculiar it is that we can afford to look at the prescription of ex-communication, a living death, with romanticism. Life is better with rose-colored glasses, in fact, they become a drug.

I believe in Spinoza's god, who reveals himself in the lawful harmony of the world, not in a God who concerns himself with the fate and the doings of mankind ...."
— Albert Einstein, To Rabbi Herbert Goldstein (1929)

In the 20thcentury, when atheism became imposed on Communist countries and science became a more prevalent and powerful belief system, it allowed a new human belief system to emerge, the secularist, embracing rational philosophy like a victim of all its irrationality. Never had God been so much the subject about not being the subject. It was almost impossible to be so free as to think of oneself as the singularity. We made ourselves little gods.

Everyone has a distortion to the world, a collection of empathies with Harry Potter, Lord of the Rings, or Star Wars. It humanizes the present with common ideas, quotes, and boxsets and saves us from dueling with quotes from Shakespeare and Whitman.

But the math has been done. Hollywood has churned out so much false entertainment that science is largely cliches, iPhones, and anecdotes. Everyone must put their beliefs somewhere so that they can be contained in a box labeled with its mental coordinates. Science fiction, based on our blessed imaginations, is the greatest threat to true science to the masses. It disrupts what was truthful.

To get one mere atom up to the speed of light would require every bit of energy from the known universe. In a spaceship, the crew would be stopped, frozen in time. Sorry, sci-fi fans, there is a universal speed limit. The impossible exists. As an alternative, we can build some pretty devastating bombs on a variation of the same principle.

This is essentially what they do at the "Conseil Européen pour la Recherche Nucléaire" (CERN) or "European Council for Nuclear Research", the world's largest particle accelerator in the Large Hadron Collider. A 100 meters beneath the border of France and Switzerland, through an underground 27-kilometer long tunnel filled with huge magnets, scientists get protons going 99.99999999% the speed of light and crash them with protons coming the other way at 99.999999999%. The result is a collision of new material - made from power, and a lot of data to analyze. It’s a certainty, that we cannot exceed the speed of light.  We can dream, we can create a legacy of  ‘if only’ movies, but we can’t exceed the speed of light. We can’t climb into the Millennium Falcon and tell Chewy to jump to light speed as much as we and the entire Jedi religion pray. It doesn't rule out all super interesting sorts of what had been fiction. Einstein knew this, hence his opting for a Spinozan God, a safe bet, even for a defecting Jew. He could have quipped, “Everything is mass and everything is energy” mirroring Spinoza’s, “Everything is God and God is everything”. 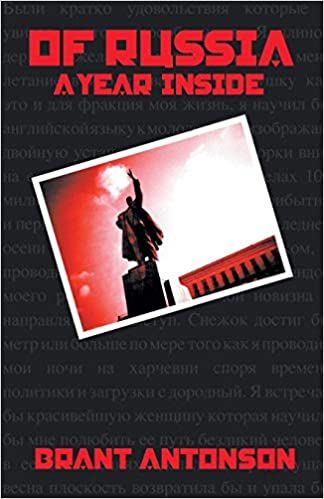 Of Russia: A Year Inside

Brant Antonson has seen a Russia few foreigners have. Indeed, few Russians. This young Canadian ventured to Voronezh, eleven hours south of Moscow by train, to spend a year inside a country torn by strife, fresh into a new century, and struggling with the clash between history and future. Tasked with teaching English to students at one university, and then a second, his story is riddled with romance and deception, and punctuated with near disaster and disappointment. Antonson's candour and insights set Russia on the edge of failure and achievement – much like the students he educated, filled with a dash of hope and a lump of fear. His wit did as much to get him in trouble as it did to keep him out of it.

Purchase on Amazon
Next The Revolution Will Not Be Televised On The APA Website.
Previous The Ethical Treatment of Animals