The Noble Prize in Economics fittingly going to Ben Bernanke

I'm getting a prize in economics myself this week—the Friede-Gard Prize for Sustainable Economics—and I was going to ignore the Nobel Prize for Economics, which is always awarded to economic insiders rather than rebels like me. But then they gave it to Ben Bernanke. This was just too much: to me, it was like awarding an accidental arsonist a prize for successful firefighting.

Why? Because far from having "significantly improved our understanding of the role of banks in the economy, particularly during financial crises", as the Nobel Prize citation claims, Bernanke (and his two companions) have preserved false ways of thinking about banks and financial crises, and suppressed realistic models of banking and financial crises.

The realistic models were developed by Irving Fisher in the 1930s, and Hyman Minsky in the 1950s-80s. Ben Bernanke played a direct role in denigrating their work—and yet they were right about what causes financial crises, and he was wrong.

In the 1920s, Irving Fisher was a conventional economic thinker, and a cheerleader for the stock market bubble that saw the Dow Jones rise from 64 in 1921 to 380 in October 1929. Then he lost everything when the Dow fell to just 41 points in 1932. Chastened and effectively bankrupted, he changed his view about one crucial factor in the US economy: private debt.

In a paper entitled "The Debt-Deflation Theory of Great Depressions", Fisher argued that what caused Great Depressions was "over-indebtedness to start with and deflation following soon after".

Bernanke dismissed Fisher's interpretation in his book Essays on The Great Depression, stating that though Fisher influenced Roosevelt's policies, his idea:

was less influential in academic circles, though, because of the counterargument that debt-deflation represented no more than a redistribution from one group (debtors) to another (creditors). Absent implausibly large differences in marginal spending propensities among the groups, it was suggested, pure redistributions should have no significant macroeconomic effects…

What does that gobbledegook mean? In a nutshell, Bernanke was relying on the mainstream theory that banks simply act as intermediaries between savers and borrowers—the ideas for which his Nobble (not a typo!) Prize companions Diamond and Dybvig received their share of the Bank of Sweden's loot this year (the prize was created by and funded by the Central Bank of Sweden, not the Nobel Foundation).

Leaving those ideas aside for a moment, let's get empirical. Fisher argued that "over-indebtedness" was the key trigger in Great Depressions: was there any evidence for this that Bernanke had access to, when he wrote the above putdown?

Yes in fact, there was: in 1975, 25 years before Bernanke published Essays on The Great Depression, the United States Census published Historical Statistics of the United States Colonial Times to 1970, with time series on private debt starting in 1834 and finishing in 1970. If Bernanke had looked at that data, rather than dismissing Fisher's argument simply because it conflicted with mainstream economic thinking, then he would have seen that Fisher was right: there was a huge debt bubble in the 1920s, which increased debt from 60% of GDP at the start of the decade to 140% at its end (I've normalized the data to make it consistent with The Federal Reserve's debt series, which commenced in 1946). Its bursting saw credit—the annual change in debt—fall from almost 10% of GDP at its peak to minus 9% at its nadir in 1933.

So there was empirical support to Fisher's argument. Hyman Minsky turned Fisher's insight into a theory of economic booms and busts with what he christened the "Financial Instability Hypothesis". A crucial part of his argument was that rising debt caused money to be created, so that total aggregate demand exceeded income from the sale of goods and services alone:

For real aggregate demand to be increasing … it is necessary that current spending plans … be greater than current received income … For such planned deficits to succeed in raising income … it is necessary for some of the spending to be financed … by the creation of new money.

Bernanke read Minsky. What did he make of his argument? The next quote is the sum total of Bernanke's comments on Minsky in his book:

Hyman Minsky (1977) and Charles Kindleberger (1978) have in several places argued for the inherent instability of the financial system, but in doing so have had to depart from the assumption of rational economic behavior… I do not deny the possible importance of irrationality in economic life; however, it seems that the best research strategy is to push the rationality postulate as far as it will go.

That's it: he ignored Minsky, because Minsky rejected Neoclassical economics. He therefore also ignored the economic indicators that Fisher and Minsky said were important—the level of private debt, and its rate of change. He blamed the Federal Reserve for causing the Great Depression instead. When I read Bernanke's book in 2006, I thought it fitting that his ignorance was going to lead to him presiding over another financial crisis, as the Chairman of the Federal Reserve.

And although there are a lot of Americans who understandably think that government money would be better spent going directly to families and businesses instead of banks – "where's our bailout?," they ask – the truth is that a dollar of capital in a bank can actually result in eight or ten dollars of loans to families and businesses, a multiplier effect that can ultimately lead to a faster pace of economic growth.

That is the mythical "money multiplier" model of money creation that the Bank of England said was rubbish in 2014. But because Bernanke believed that myth, and Obama followed his advice, the recovery from the Global Financial Crisis was the slowest recovery from a recession in the history of the United States. By comparison, the recovery from the Covid recession was the fastest—and then the money went straight to the public, rather than to the banks.

For these failures, Bernanke gets the Economics Nobel. That's why I nicknamed it the Nobble Prize: it nobbles new thinking, and locks us into perpetual crises, thanks to the ignorance that Neoclassical economists have about the real world. So, thanks Ben. You will surely enjoy your Prize, but the rest of us will suffer from it, thanks to the ignorance the Prize rewards you for perpetuating. 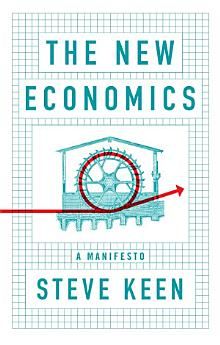