According to Jenkins, romantic love is a functional construct, mostly socially constituted, with a teeny tiny place left over for some causally inert phenomenology.

In his introduction to The Passions, Robert Solomon quite rightly insists that philosophy really matters.

The field is not (or should not be) “a self-generating profession of conjectures and refutations” that concern “a self-contained system of problems and puzzles” (p. 1).

Instead, we should keep in mind that because we are all philosophers, thinking about life should be our central focus.

According to Solomon, “nothing has been more harmful to philosophy than its ‘professionalization,’” which has rendered philosophy increasingly impersonal and technical as a discipline (p. 2).

Part of the problem, he recognizes, is that we live in a society (particularly in the United States) in which the intellect often is viewed as not just useless, but pretentious.

People tend to prefer “entertainment” to thought or intellectual pursuits.

And professional philosophy’s tendency to emphasize the technical, to introduce terminology that is in tension with common usage, and to focus on what seem to be trivial matters, has only reinforced many people’s sense that philosophy is irrelevant when it comes to everyday concerns.

The field has become increasingly detached from the “gut-level” questions that gave rise to the philosophical puzzles in the first place.

Early on in my graduate school career, I became interested in love.

As I delved into the topic, I discovered how challenging conceptual analysis can be.

Not surprisingly, it was difficult to provide necessary and sufficient conditions for love.

I also found it interesting how relatively little work had been written on the topic.

And perhaps I was naïve, but I was surprised to discover that one of the central theorists delving into the subject, Harry Frankfurt, analyzed it in such a way that affectivity played no necessary role.

One of my graduate school professors advised me not to write about love in my Ph.D. dissertation, explaining that going down that road likely would make it difficult to get a job.

To this day, I appreciate his professional advice.

But in retrospect, I think it is sad that the professional philosophy of the 20th and 21st century tends to be so technical and impersonal that there is relatively little space to explore topics like ‘love.’

Even in the sub-field of moral psychology, phenomena such as empathy, ambivalence, shame, and regret often are approached in a way that feels detached from the everyday concerns of real-life people.

This may be because professional academic philosophers have a tendency to over-intellectualize these phenomena, and also tend to assume that feelings and emotions interfere with cognitive processes and rational thinking.

It’s an interesting essay, but weirdly passionless and abstract.

According to Jenkins, romantic love is a functional construct, mostly socially constituted, with a teeny tiny place leftover for some causally inert phenomenology.

That it can completely transform you, and that it can also hurt like hell.

Sadly, most female rockers, rappers, blues singers, and country-and-western singers have an essentially better handle on love than Jenkins does.

So in my view, the passions are an integral part of cognitive functioning, and certainly, they are worthy of our philosophical attention.

They are, in fact, what makes real philosophy worth doing and what gives our lives meaning.

And students get this.

They are drawn in by those parts of real philosophy that tap into what they care about, and are reluctant to focus too much time or attention on questions that seem too far removed from their real-life concerns.

So as Solomon notes, what keeps real philosophy alive are the students.

They listen to rock music, rap, blues, and country-and-western.

They fall in love, they are often personally transformed by it, and they hurt like hell when love goes wrong.

These young people remind professional academic philosophers that “philosophy is not a detached set of professional puzzles; it is rather a desperately needed discipline for straightening confused lives” (p. 3).

And obviously one need not go any further than the roughly 150 philosophy departments with graduate programs in North America to find a vast array of examples of confused lives.

However, Solomon further notes that many of these students come into a philosophy class never having been asked to really think about things before.

As a result, they are bewildered by simple questions and utterly baffled by small paradoxes.

Some of them resent being jarred out of their “well-conditioned illusions,” while others resent having to learn about theories and ideas that bear no obvious connection to their future careers.

They want to know: “what can I do with what I’ve learned?”

One obvious answer is that the study of real philosophy can help these students to reflect on what they care about and thereby lead better, fuller lives.”

It is true that in a society where “success” often is equated with wealth, this answer may not satisfy everyone.

Still, I am struck by just how many young people are thankful for the opportunity to scrutinize some of their assumptions and ponder the meaning of their lives.

This is the role of real philosophy: to encourage the questioning of habits and personal introspection; to “jostle the intellects of America’s television-dazed children and hassle-tired adults until they become alive” (p. 4).

Real philosophy belongs in the streets, in the contemporary marketplace.

Its central goal should be to illuminate our human concerns.

What gives life its significance and meaning is not be found “outside” of life, in the static realm of pure ideas, but rather the concerns and passions found within life itself.

Classroom discussion of philosophical themes in relation to film, literature, and real-life case studies are all important ways of bringing philosophy into the streets and the marketplace and highlighting the many ways in which it really matters.

I also think that some of the research professional academic philosophers do is creative, provocative and insightful.

Real philosophy is about passionately loving the questions; being open to other ways of thinking; appreciating the passionate side of life, and viewing it as integral to human existence; being curious and inquisitive; about having respect for the many thinkers and traditions that have come before; about refusing to be dismissive of any school of thought, style, or approach; about engaging in cooperative and collaborative projects and discussions with other philosophers; about embracing a perspective that seems farfetched at first, and doing one’s best to see the kernel of truth that it embodies.

Interestingly, at the end of this introductory section, Solomon urges introspection.

He says that we ought to examine our passions and that we must change ourselves before we can change society (p. 9).

However, in order to change ourselves, we must first understand ourselves.

As real philosophers, we should strive to become skilled at introspection, questioning our motives, recognizing our weaknesses, and at finding ways to improve our philosophical lives.

What is it that makes us passionate about teaching, reading, writing, and engaging in dialogue?

What do these pursuits add to our lives, both professionally and personally, and what can they add to the lives of our students?

What sort of changes would we like to see in our field or, more broadly, in higher education?

What can we do to convey the passion that we have to the wider community so that they more fully understand the value of real philosophy?

And I’m truly thankful to Solomon for reminding us of this.

So forget Jenkins and passionless professional academic Analytic metaphysics: listen to your favourite rock, rap, blues, or country-and-western; and then read or re-read Solomon’s The Passions. 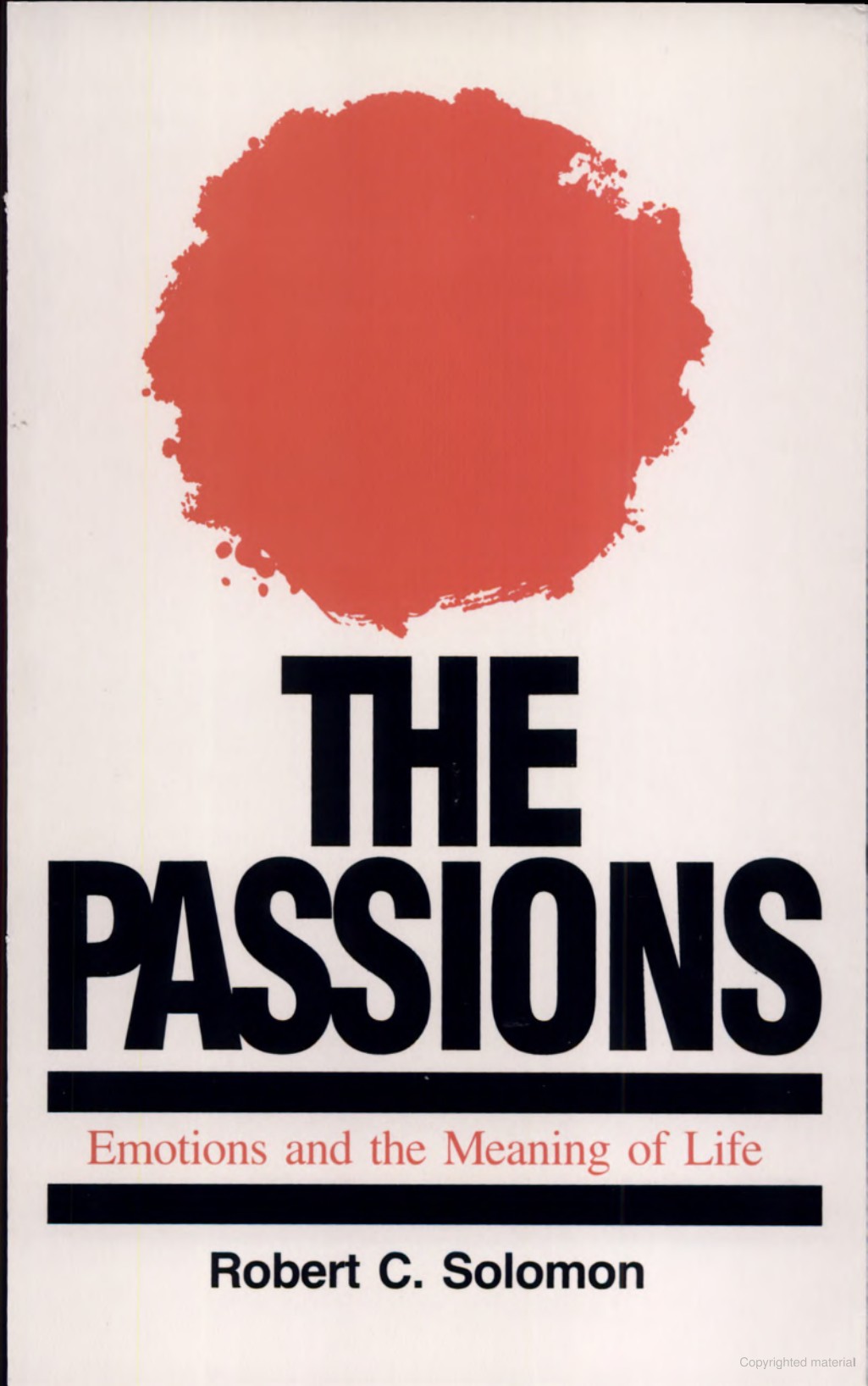 The Passions: Emotions and the Meaning of Life

A survey of astonishing breadth and penetration. No cognitive neuroscientist should ever conduct an experiment in the domain of emotions without reading this book, twice.

Purchase from the Book Depository
Y

The Theodicy of 1710, Leibniz and the Queen of Hanover